Ghost in the Artifact: Object-Oriented Histories and the Archaeology of the Present

There’s a scene in the 1994 film Pulp Fiction where Captain Koons, played by Christopher Walken, explains the history behind a gold watch he’s delivering to the adolescent son of a fallen Vietnam War comrade. On its face, this scene is evidence that Walken is a great actor and Quentin Tarantino writes dialogue well. More important, though, it demonstrates that even seemingly mundane objects have interesting and sincere stories attached to them. 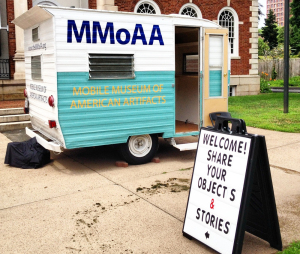 Since founding the Mobile Museum of American Artifacts (MMoAA) about two years ago, director Laurelin Kruse has explored the relationship between objects, the people who owned them, and the stories that bind them together. During a June 2015 event in Somerville, MA (co-sponsored by NEMMC), Kruse stood in front of the 1968 Cardinal travel trailer that houses the museum’s collection, and discussed its origins, objectives, and ongoing collection development.

The fuels that keep this traveling…

I welcome your comments and questions! Cancel reply